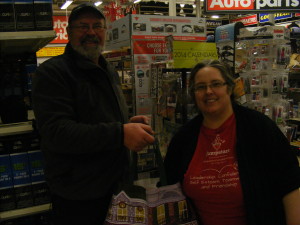 Congratulations to the winners! 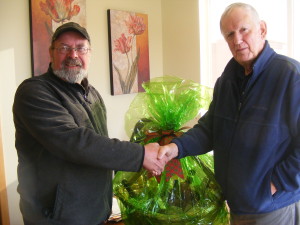 Thank you to everyone who purchased tickets.  Your support is greatly appreciated.  Thanks, also, to Sue and Donald Turner for co-ordinating this fundraiser and to all volunteers who helped in any way. 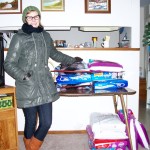 The numerous bags of cat food were the result of proceeds from Colour Blind’s 3rd Annual Art for Animals Raffle, held December 14, 2013. 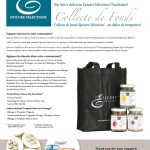 Connie Gaudette sold Epicure Selections Extraordinary Cheese Dip Fundraiser kits with a portion of her proceeds going to the the Cat Action Team.

Tamara’s Pet Parlor of O’Leary invited families to bring along their furry companions and have their pictures taken with Santa.  Pawsitively Perfect took the photographs.  Proceeds from this event were donated to the Cat Action Team.

Thank you to everyone! 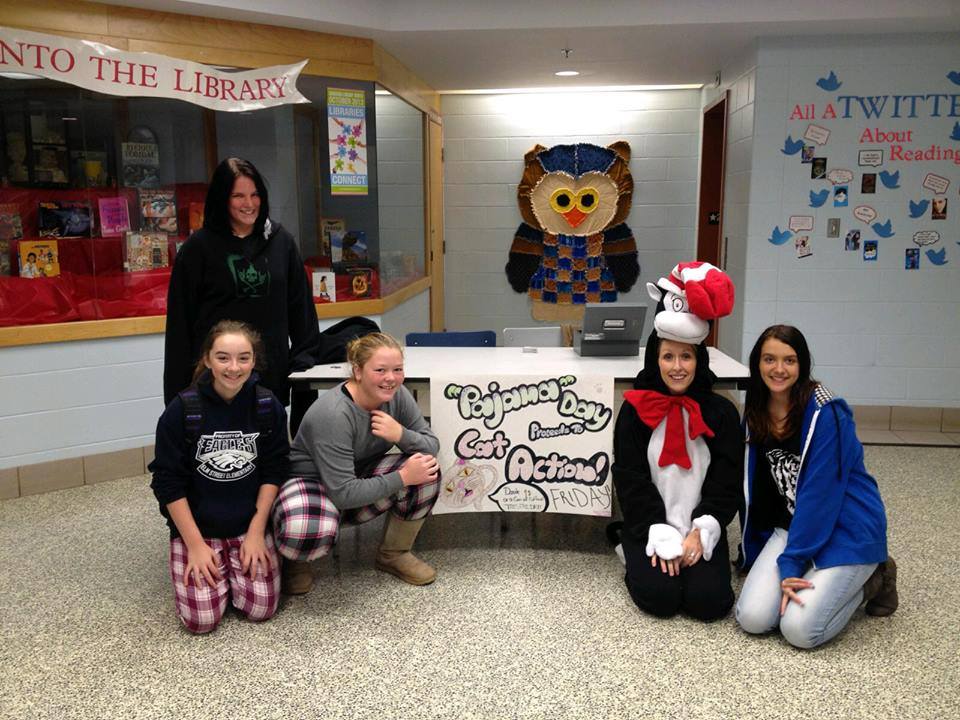 Teacher (“Cat in the Hat”) Kelly Adams MacNeill and students of her Grade 9 class held a “Pajama Day” fundraiser recently, with proceeds being donated to the Cat Action Team.

October 11th was the final day for people to place their orders for Vesey’s fall bulbs and other Vesey’s items.

Thank you to everyone who placed an order and to organizer Diane Minick and
volunteers for all of your efforts. 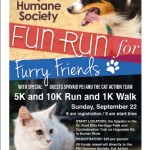 The Cat Action Team and SpayAid PEI were the special guests of The PEI Humane Society, who hosted the Fun Run for Furry Friends event September 22, 2013. The fun-filled morning consisted of runs, walks, demonstrations of flyball and clicker training, having your “paw” read by the Gypsy paw reader, kids’ activities, a “dress up your pet” contest and some of the adorable adoptables from the PEI Humane Society.

CAT had tickets available for the Christmas Cheer Basket raffle along with cookbooks, catnip mice, preserves, cat books and goodies.

Thank you to the PEI Humane Society for the invitation to this event.

CAT members also had a table set up for the two-day 70-Mile Yard Sale that was held in Kings County September 21-22.  Busy weekend for CAT members! 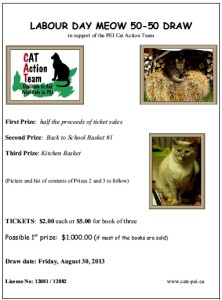 Congratulations to the winners!

Thank you to Paula Connolly for organizing this fundraiser, and to all the volunteers who assisted.

Thank you to everyone who purchased tickets.

A Charlottetown, PEI, resident parked vehicles as a fundraiser for CAT during Charlottetown’s Old Home Week.  Thank you, Marlene B., for your fundraising effort.

Thank you to those who donated to the Sale, to the organizers and volunteers for their efforts, and to the public for your support. 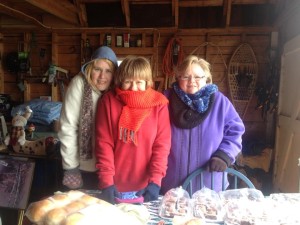 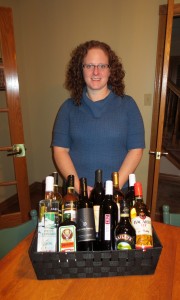 The winning tickets for the 2012 “Christmas Cheer Raffle” were drawn on December 16 at the Colour Blind Boutique in Charlottetown.

The second prize winner was Geoff Holroyd of Winsloe.

CONGRATULATIONS to Marla, Geoff and Treena.

Many thanks to Lynsey Bradley and Heather Millar, who drew the winning tickets. 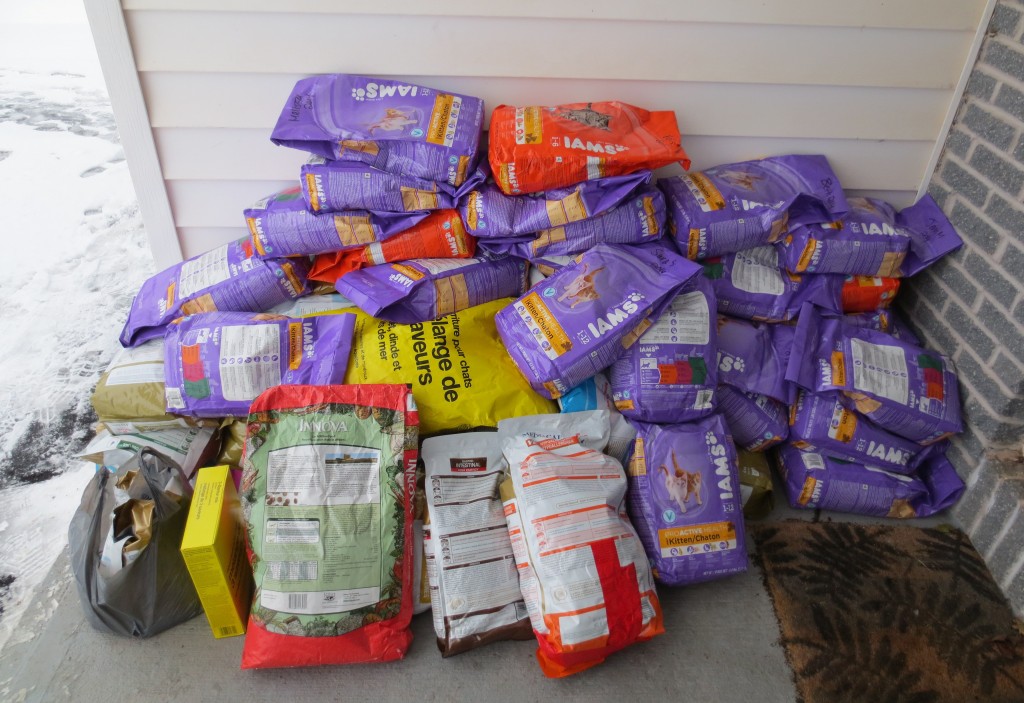 In the fall term of 2012, students at the Atlantic Veterinary College of the University of Prince Edward Island donated a large quantity of food for the feral cats living in our colonies. Here is a picture of just a portion of the food donated.

CAT thanks the AVC students, and especially Melissa Parsons, an AVC student and long-time CAT volunteer, who organized the food campaign.

Their efforts will prevent many cats from going hungry this winter! 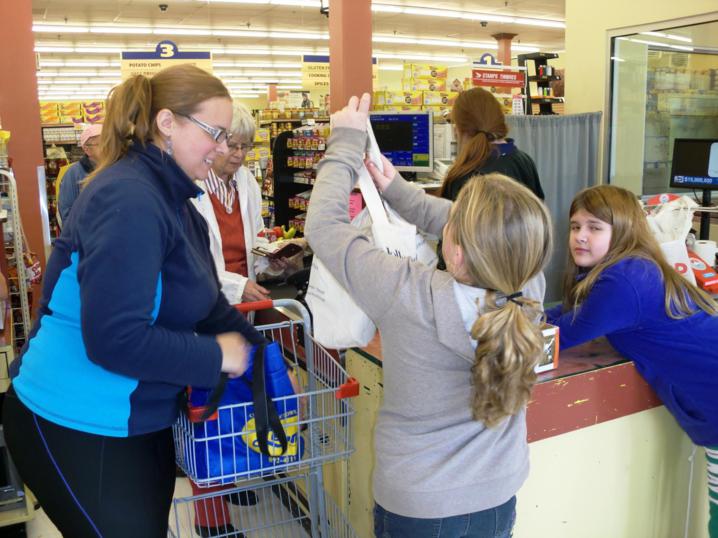 In order to call attention to  International Feral Cat Day (October 16, 2012), some of our younger volunteers got to work bagging groceries at the Co-Op Food Market on Queen Street in Charlottetown.


THANK YOU, from the Cats, to Shawna Walsh-O’Kane, Zoe Larter, and Aiden O’Kane!

Congratulations to the winners of the FIFTH ANNUAL THANKSGIVING MEOW 50-50 DRAW 2012.

THANKS to Paula Connolly, who organized the Draw, and to all volunteers who helped sell tickets.