Below, Donna as she organizes a shipment of donated food, preparing it for distribution to hungry cats island-wide.  This is just one of her many contributions and a glimpse into the countless hours Donna spent volunteering with Cat Action Team on behalf of homeless cats. 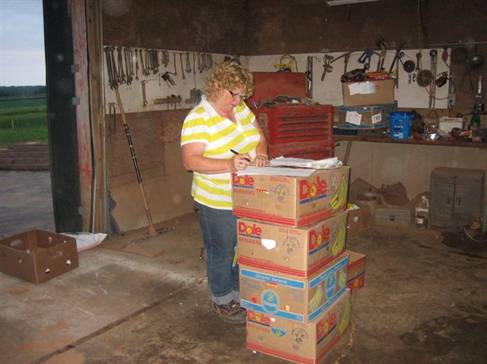 I’ve known Donna since she first started with the Cat Action Team. Throughout the life of the organization, she took on many volunteer roles such as sitting on the Board, helping trap and care for neutered/spayed cats, helping find safe locations for cats who could not be returned to their original colony/home, fostering cats and kittens, fund raising, organizing the cat food shipments, and supporting other CAT members as needed. She was by far one of the most dedicated and reliable volunteers the group ever had – if she said she was going to do something, she did it and did it well. That says something about her personality and values. During the times her and I worked together on tasks, we always had a few good laughs and provided each other with support. I was always amazed at her stamina and what she was able to take on. Her love for animals knew no bounds and she gave all she had to ensure those who crossed her path were taken care of. She will be sorely missed not only by her CAT colleagues but also by all the wonderful animals she loved and supported. Below is a poem I always loved and expresses how I feel about Donna and her passing.

A rose once grew
Where all could see,
Sheltered beside
A garden wall,
And as the days passed
Swiftly by,
It spread its branches, straight and tall….

One day, a beam of light
Shone through
A crevice that had
Opened wide ~
The rose bent gently
Toward its warmth
Then passed beyond
To the other side

Now, you who deeply
Feel its loss,
Be comforted ~ the rose blooms there ~
Its beauty even greater now,
Nurtured by
God’s own loving care.

Colleen Pidgeon Tuesday, April 27, 2010
I regret never having taken the time to tell Donna how much I admire her, and now I can’t. Donna was a force to be reckoned with and had the food shipment down to a science! Everyone got their fair share of whatever arrived. That is only one of the places that the CAT Action Team will miss her efforts and her wise counsel. Colleen Pidgeon

Diane Minick Tuesday, April 27, 2010
I have known Donna for many years, she has been a CAT member and fund-raiser for a long time.
She would NEVER give up helping animals- that was one of her outstanding qualities.
As a friend of hers said:
Donna would be angry, now, that she can’t help all the little critters that she would find on her way to work.
Donna helped all types of animals- cats, dogs,horses, skunks- whatever came across her path and needed help.
Donna would get right down to the facts and was not intimidated by anyone. She would rescue cats from people who refused to feed them and inform people about how animals should be fed.
I was aware that Donna participated in many fund-raisers, apart from CAT, including “riders for sight” but when I attended her wake today, was astounded by the loving tributes from many organizations that Donna was obviously part of.
I first met Donna in 2001 when she wrote a letter to the editor of the “Journal Pioneer.” She was exclaiming and scolding about the numbers of house cats and kittens which were being “dumped” at the Summerside racetrack, where Donna had her horse. I liked her letter and got in touch with her.
Nothing has changed since 2001 with this “dumping of cats” so lets try to get education going, in honour of Donna. am sure that she would like any help for animals- that could be in her honour , esp catfood!
Diane

I met Donna in the fall of 2000 at the beginning of the CAT Action Team. She became a very dear friend from whom I learned much. Her determination and strong willpower helped her accomplish anything she set out to do!

Donna knew lots about all animals and her love for all kinds of God’s creatures was unconditional. When presented with troubles or problems, Donna knew how to shake it off and find a solution. She never waivered in her commitment to Cat Action Team to excel. With her, it was always ‘Mission Possible’ regardless of the work that was involved.

Feeding the cats was always a passion for Donna. After a long, hard Friday working, she would take on the food shipment with a smile. The CAT Action Team will miss a very good and dedicated person. I want to thank her from the bottom of my heart for all her help and commitment to the food shipment, delivery of mice, and all the successful fundraising she did. WHAT A WOMAN!!!

I am sure she can hear me! She lives her life to the fullest of her believes, and was not afraid of tomorrow. She touched the lives of many people and animals, so will be missed greatly by all; human and furry friends alike. She was an angel for many cats and I will always keep happy memories of Donna, close to my heart where she has left her footprint.

~If you have a story, memory, or photo of Donna you would like to share, please email cataction.webmaster@gmail.com.~